WHERE DO WE GO WITH OUR QUESTIONS? NOWADAYS MOST OFTEN TO DADDY GOOGLE (SUPPOSEDLY OUR FRIEND). HERE IS WHY I AM ABANDONING DADDY LONGEARS FOR SOMETHING MUCH BETTER…

— I admit it, that was an attention getting headline, almost a bait. But my exaggeration, if exaggeration it be, is based on long discontentment with The World According to Google.

Where shall we begin? Let´s first look at the strange and utterly boring phenomenon of Google referral, we can shorten that to GORE.

When I in olden times —  20-30 years ago — asked my friends about something they knew or might know better than me, there were many possible answers.

There were other possibilities but these were the main ones. Once upon a time it was interesting, sometimes even exiting to ask people questions. And yes, I admit to being perhaps over-questioning; sometimes I take the lazy road of asking, instead of finding out myself. However, at times I do this intentionally just to see what kind of answer forthcomes from a certain person.

Well, those were the old, adventurous times. And I am not joking. If we really think back on life some 40 years ago asking questions was really something different from today. We had variety and diversity back then.

Those exiting times are now over. Now we have — Google.

If I ask a friend something, there is a 87.6 % probability that he will answer: Ask Google. (As if asking and searching were the same thing.) Just as boring and predictable is the variant “Try Internet” —  which really is just another way of saying “ask Google”.

The other 12.4 % can still be an adventure, but clearly adventure shrinks and the GORE just grows.

This tendency has been made into an art form by some wise guys. (Beg pardon for using the words “art” and “wise” in this context.) The website Let me Google that for you has the following presentation:

For all those people who find it more convenient to bother you with their question rather than google it for themselves.

I suppose this is milder way of saying. “F*ck of, questioner. What makes you think that I want to help you, that I am interested in anybody´s questions??”

The phrase “Let me Google that for you” sounds almost innocent, as if the person was actually prepared to help you and be nice to you — perhaps push your wheelchair up a hill — and not just arrogantly pointing out the idiocy of asking him, not Google.

But… on second thought it maybe WAS idiocy to ask him. Because he sees me, the asker, as an idiot.

Check it out for yourself HERE. At the very bottom of the page it says in fine print “If you still have any questions — read this”. Click on “this” and find out WHAT YOU ARE. (Be sure to have sound turned on.)

So here we are, with Google for idiots.

I would venture, coming dangerously close to arrogance myself, that this is Google BY idiots. I mean, if it is idiocy to direct your questions to someone else than Daddy Longears, then intelligence cannot be worth much. This picture sums up part of the confusion. 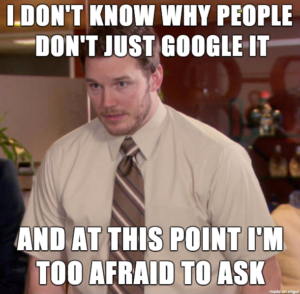 Well, young man, now you know at least why yours truly don´t just Google it.

As I see it there´s an unsympathetic arrogance surrounding Google use and a strange, aseptic recoiling in the presence of human contact. I am not surprised when young nerdy hackers say “let me google that for you”. However, when a grown up friend with clearly established expertise answers a question of mine about his field with “Try Internet”, I start muttering “damned rejuvenation!”.

Sure, one could liken the answer “Ask Google” to “Ask Encyclopedia Britannica”. But E.B., I now mean the paper version (remember, I am talking about 30-40 years back), did not gather information on (euphemism for “spy on”) you, did not have a virtual monopoly on information and certainly did not cruise your streets taking photographs of your house and garden.

But let´s not go there, let´s go to Quora. Let´s swap algorithms for people!

Quora´s slogan is “The best answer to my question.” Well, that´s a slogan, thus exaggerated. You don´t always find an answer, or the best answer, on Quora. But you find something else, namely people with a friendly, antediluvian (i.e. pre-Google) attitude towards questions and questioning.

I am sure Quora also has a business model. I don´t know much about it and frankly don´t much care. I am not saying that they are idealistic saints — but they sure look like it beside Google.

So here´s my story: Since I joined Quora the whole tiring, arrogant Google thing (here´s another example) has vanished in thin air. When I stumble upon a problem, or need interesting, insightful input, or have come to a halt in my writings, I go to Quora. Which in practice means going to individuals who are interested in helping, sharing (for free) what they know, formulating themselves (a part of the wisdom process).

This looks like a real win-win situation to me.

I get very useful, practical and valuable information, answers and feedback. Those who answer me personally (something Google never does) get to formulate their knowledge / expertise/ wisdom. They get applause, appreciation and commendation for their efforts, and (at least indirectly) can themselves learn more in the process.

In short, a good time is had by all, which is not a small thing these days on the Internet.

PS: I am sure you know the address to Google. Here´s Quora.